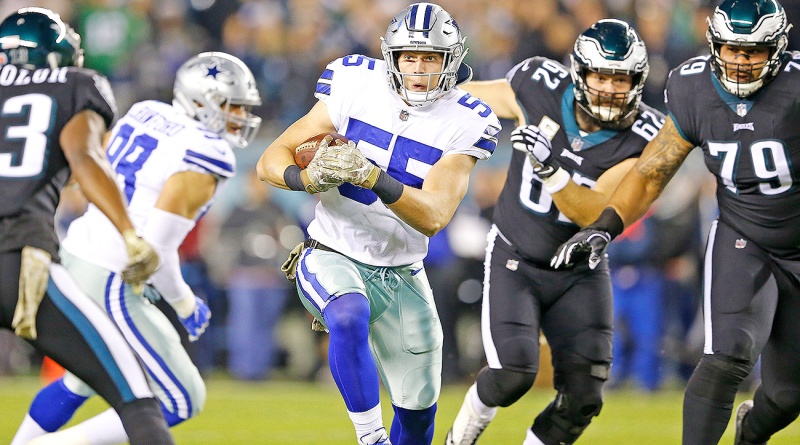 Everything seemed to be perfect for the Eagles going into Sunday.  Dallas entered the game on a short week after losing a Monday night game by two touchdowns at home to Tennessee. Also, Dallas had to go on the road where they have been winless this year. Philadelphia had 2 weeks to prepare, Carson Wentz is back to 100% healthy, and they were at home. But with there season on the line and backs against the wall, the Cowboys temporarily saved their season.

Ezekiel Elliott took over the game offensively carrying the ball 19 times for 151 yards and a TD while also catching 6 for 36 and a score. Ezekiel had plenty of chunk runs in the 2nd half and almost had the play of the year, hurdling over a safety before tripping at the 10. Prescott was shaky in the first half, but played his best half of the season in the 2nd half. Dallas was much better on third down because Prescott made some throws, but also because they were manageable 3rd downs. Both Prescott and Elliott were aided by an o-line that had its best performance of the year. You have to wonder after that performance if Xavier Su’a-Fila should be the full-time left guard even when rookie Connor Williams comes back from a knee injury. Williams has looked overmatched this year, and often times has been the weak link on the o-line. Su’a-Fila played very well, and worked well with Tyron Smith on the left side. I have been in the majority with wanting Jason Garrett and Scott Linehan fired, but I have to give them credit for Sunday night. The play-calling for the most part was pretty good, and Garrett did make a gutsy decision to got for a 4th and 2 on his own 31 yard line with a fake punt to Jeff Heath which was successful.

I have been pleasantly shocked in the play of Leighton Vander Esch. He’s big, fast, long, and rangy. He made a early momentum interception, and made a huge 3rd down play late in the game on a screen to get the Eagles to 4th down which Dallas ended up stopping. On draft night, I thought Dallas was foolish for taking a former walk-on LB from Boise St that just a few years before had been playing 8 man football. I longed for a playmaker on the outside like DJ Moore or Calvin Ridley. As good as Ridley has been, Vander Esch has proved Dallas right on using the 18th overall pick on him.

Jaylon Smith has also been a terror in his 2nd season playing after being injured his entire first year. After a career-threatening injury made him drop all the way to the second round to Dallas, he has regained his speed and explosiveness that he had at Notre Dame. Smith has a chance to be a perennial pro bowler. These two linebackers are special. Dallas is in good hands with Vander Esch and Smith as their LB’s in the future.

All is not back to perfect in Dallas. The next 4 weeks is a very tough slate for the Boys. They go at Atlanta this Sunday, then face the Redskins, Saints, and Eagles at home. But maybe this team can takeoff after this game. Maybe the offense will continue to get better with Amari Cooper’s impact and Xavier Su’a-Fila at LG. Time will tell.