This is the weekend we have all been waiting for. It’s rivalry week.

The slate of games is absolutely absurd! We have 5 ranked matchups. Numerous rivalry games that you just know will be close, because they always are – like USC/Notre Dame, Georgia Tech/Georgia, etc.

However, none. I repeat, NONE. Are bigger than the one at noon eastern on Fox.

This is undoubtedly one of the greatest rivalries in college football, and is quite possibly the best of them all.

Let’s make no mistake about it, the number one factor making this rivalry great it pure hatred shared between the two teams.

But even when you pull that away, what you find is two of the top-5 programs in nearly every statistical category. 19 National Championships, 10 Heisman winners. 810 draft picks.

But this year, this year is different.

This is undoubtedly the biggest game since 2006 when Troy Smith, solidified his Heisman campaign and clinched a national title game birth for the buckeyes. It was 1 vs 2. Prime-time. As good as it gets.

The most surprising part of this year however, is that it only carries this weight for one side.

It is only this big, for Michigan.

All thanks to the man in that picture, Jim Harbaugh.

He’s the savior. The one elected to resurrect a giant. The son, that has returned home to lead his troops back to the promised land.

A sort of great value LeBron James some may say.

All of this, has fallen on his shoulders.

Not all of this isn’t entirely fair, he stepped into a program that was in a state of disarray. They had gone 1-11 in past 12 years against the buckeyes when he took the job at Michigan in 2015. And had hardly competed on a nation scale since the turn of the century.

Jim had his work cut out for him, and props to him, he’s done a decent job.

But, the job is not finished. As much talent he has brought into Ann Arbor, the results have yet to live up to the lofty expectations.

Has Harbaugh successfully brought the wolverines back into the national spotlight? Yes.

It’s quite baffling actually, he has a losing record to his main rivals in Michigan State and Ohio State, and in bowl games.

Even this year, in the self-deemed “Revenge Tour,” the wolverines have lost their only real, competent, prime time game against Notre Dame. It appeared as though they had one in Wisconsin, but the badgers fell off a cliff in the second half of the season.

However, this is where you truly get why this game is so important.

Michigan is firing on all cylinders right now.

Offense, the least constipated a Wolverine offense has looked since they had Denard Robinson.

Undoubtedly, a win should secure a birth in the College Football Playoff. Barring a colossal upset against Northwestern in the B1G Title game.

On the flip side, the Buckeyes aren’t doing so hot.

The defense has not been the same since they lost Nick Bosa for the season back in week 3. The running game has been patchy at best. And they are coming off a game at Maryland, where by the grace of God Himself, they ESCAPED with a win.

Ohio State is not even favored in The Game at home, for the first time in 51 games.

All signs point toward Michigan finally, finally beating the bucks. 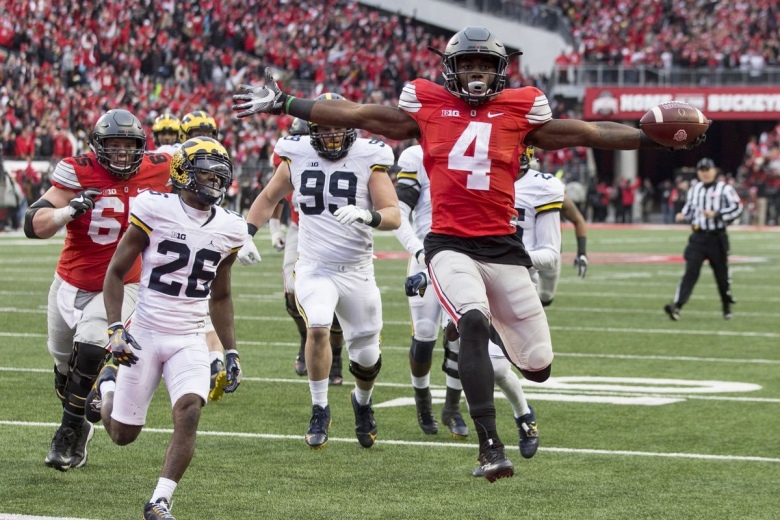 But that is why this is important.

EVERYTHING, everything is going Michigan’s way. They actually SHOULD win this game. In Harbaugh’s 4th year, he finally has HIS players. And Ohio State, does NOT look good.

I don’t mean to sound crazy, or jump to conclusions, but this game could have decades of relevance.

It could be the icing on the top of the revenge tour.

It could give the Wolverines a playoff birth.

It could prove the Jim Harbaugh experiment successful.

It could also bury them.

Ruin a shot at a National Title.

Michigan losing this game, would give buckeye fans everywhere the right to metaphorically cut the head off of the Michigan beast, and drag it throughout the streets, knowing not a single Michigan fan can do anything about it. Proclaiming them as dead, and announcing Harbaugh as a fraud.

If Michigan can’t do it now.

*Correction… if HARBAUGH can’t do it now.*

He arguably never will.